Correction Tape: Tips for selection and use

We’ve gotten used to the fact that with digital documents, all it takes is the push of a button to correct small mistakes in an instant. When drawing with pencils, your eraser is usually next to the paper anyway, so you can easily make quick corrections while working. But things are different with printed documents, because you can’t use an eraser to make corrections. Correction tape allows you to quickly make corrections, making it a handy tool that’s even good for handwritten documents. Correction tape is an indispensable aid in day-to-day office life and offers a rapid solution for printed documents.

If you’re looking for correction tape and want to know how to make the right choice, you’ve come to the right place.

Learn more about our products

The first correction roller with advanced "Air Technology" that makes correcting more comfortable and easier than ever.
Packaging size selectable
from€4.90(€0.31 / 1 m)
Details

Central roller with a soft comfort-grip, suitable for left- and right-handed users.

The correction roller for fine work: With extra narrow 2.5-mm tape for the finest corrections. 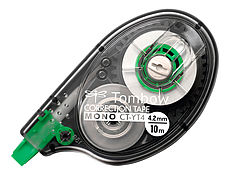 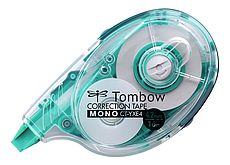 For endless correction: Refillable and with extra long 16 meter-tape. Covers perfectly and can be overwritten immediately.
Tape width selectable
from€4.65(€0.29 / 1 m)
Details 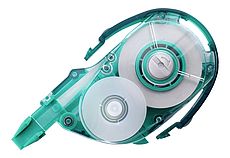 Making corrections to printed documents is something that people that work in offices frequently need to do. If a mistake has managed to sneak in or documents have been updated in the meantime, they need to be revised. The advantage of working with correction tape is that it’s a dry correction that can be written on immediately.

Simply roll the correction tape over the corresponding part of the document and then make your corrections. To correct text, you can select a correction tape dispenser that matches the width of the font size and the line height. Then you only have to roll over the text once to cover the entire line.

But correction tape is also a practical addition for artists and creative individuals who work with white paper. The tape can be used to cover individual lines or passages of a work and then paint over them. Depending on whether you want to correct fine lines, a computer printout, or handwritten text, Tombow allows users to select correction tape dispensers in different widths: 2.5 mm, 4.2 mm, 5 mm, or 6 mm.

Thanks to correction tape, you can quickly adjust the document without having to reprint it.

I’ve become accustomed to using correction tape just as naturally as an eraser. This saves me a lot of time – and the result is always clean.

A correction tape dispenser holds a coated, tear-resistant tape wound onto a spool. If the user guides the tip of the dispenser over the paper with a little pressure, the coating detaches from the tape and adheres to the paper. The carrier tape continues to move and rolls up on a second spool. The tape thus moves from one spool to another during use. When the correction tape is used up, the tape will have completely wound itself from one spool to the other.

The dispenser has a screw that can usually be turned by hand to adjust and tighten the tape in case it ever gets twisted.

Easy to write on

The surface of a piece of paper is generally uneven. Tombow’s Easy Write Tape clings particularly well to the unevenness of regular paper surfaces, minimizing space between the tape and the surface. This prevents the correction tape from tearing when being written on.

The MONO air4 has been equipped with the latest correction tape dispenser innovation from Tombow. This dispenser works without any rolling resistance, but at the same time ensures the tape stays under the necessary tension when not in use. The dispenser glides over the paper unusually easily and quietly – even towards the end of the tape, when the force has already been transferred to the other spool.

If a dispenser’s carrier tape has become loose, it can be tightened again using the adjustment screw. As an alternative, experienced users can retighten the tape by applying it more quickly.

The correction tape is opaque white and does not cast any shadows during copying or faxing.

Can be rolled down to the last millimeter of tape

Thanks to the dispenser’s flexible tip, the correction tape can be applied smoothly, even on slightly uneven surfaces.

The transparent housing of most correction tape dispensers allows you to see how much tape is left.

The right correction tape for everyone

Many models, like the MONO YT4, are designed to be used sideways, making the dispenser more comfortable to hold – similar to holding a pen. For left-handed users, we recommend a dispenser that dispenses the tape straight out in the direction of the roll.

Each Tombow correction tape dispenser is tested by hand immediately after assembly to ensure it can be used without any issues.

Correction Tape Dispensers Are Also Perfect for Your Creative Projects

You can also use a correction tape dispenser’s smooth white tape for your creative projects. For example, PopFizzPaper shows how to use the MONO air4for scrapbooking.

The MONO air 4 is the first correction tape dispenser with our “Air Touch” technology, which makes correcting as comfortable and easy as never before. The MONO air4 glides easily over the paper.

Back when people still used typewriters, a typo was often a reason to have to retype the entire page. As a result, correction paper was developed that could be placed over the typo. This allowed you to retype the incorrectly typed letter in white – and then type the correct character over it. Some typewriter models even had an built-in correction ribbon that could be used instead of the normal ribbon by pressing a certain key combination.

In addition, there’s also a white correction fluid – known as white-out – available for correcting finished typed pages. This fluid is applied with a small brush – but the surface is then often anything but smooth. Besides that, the correction fluid must first dry before it can be written on. The correction tape dispenser replaces all of this. It has the advantage that it is immediately ready for use, corrects dry, and allows you to work in a clean and controlled manner.

If you care about the environmental friendliness of your creative tools, you’ll be happy to know that many Tombow correction tape dispensers are refillable. Refilling the dispenser is dead easy. With one click you open the dispenser, remove the spent cartridge, and pop in the fresh refill. Close, and your ready to go.

The MONO office and MONO YXE models are both refillable. In addition, at least 50 percent of the total gross weight is made from recycled material, with some correction tape dispensers even exceeding 70 percent.

It would be hard to make your corrections any more environmentally friendly.

Have fun – and stay creative.