Relaxation, finding calm, order – we bring all these together with the term “mandala.” But what exactly is a mandala? Where does the term come from and why should drawing mandalas be so relaxing? What do you need to draw a mandala and how is it best to get started?

If you’re asking these kinds of questions, you’ve come to the right place.

The term mandala originates from Sanskrit and essentially means “circle.” What all mandalas have in common is their center, from which all the shapes and symbols emanate. In Buddhism and Hinduism, it is closely associated with religion and spirituality. The mandala is used both for religious rituals and for meditation.

In the Western world, mandalas have lost their religious significance and usually only represent the meditative coloring of round motifs.

Repeating geometric shapes have a calming effect on us. Our minds have already perceived the individual elements and compared them with our reflections and memories. With this, we can concentrate fully and completely on one activity – coloring – and relax. Whether a lively child or stressed adult: mandalas can help anyone. Delicate patterns in particular promote fine motor skills and concentration increases.

When coloring your mandala, there are various steps for which you will use different materials:

The choice of paper is especially important if you decide to color with brush pens. The brush tip is highly sensitive and should only be used on smooth paper, such as the Bristol Paper. You can also use smooth copy paper, such as Clairfontaine DCP.

It may be advisable at the start to sketch your mandala with a pencil, such as the MONO 100. If you are not satisfied, you can correct your sketch with an eraser.

For the lines, the recommendation is to use a water-resistant or waterproof pen, such as the MONO drawing pen or MONO twin. Fineliners like the MONO drawing pen come in various line widths and can therefore be precisely adapted to your needs. The MONO twin marker has two tips with different line widths and is waterproof thanks to its oil-based ink.

You can use various pens to color a mandala. Either take brightly colored pencils like the IROJITEN or select brush pens and felt-tip pens, such as the ABT Dual Brush Pens or TwinTones.

The ABT Dual Brush Pens are especially suited to large mandalas. With the brush tip, you can color both large areas and flexibly retrace the curves. Should you choose to make a more delicate mandala, on the other hand, the TwinTone is very well suited. You can get into every corner with the 0.4 mm fineliner tip, and can color the remaining areas with the 0.8 mm bullet tip. Both pens contain water-based ink and won’t bleed through most paper types.

There are probably numerous ways of drawing a mandala. Dagmar Gosejacob shows us her system:

To warm up, we are making an alphabet mandala:

We need nothing more than a pen and some paper. Start by drawing/writing a central pattern with the first letter. To do this, we arrange four, five, or six As symmetrically around a central point. This is our first mandala ring. Around this ring, we now arrange the second letter in the same way (see illustration).

The important thing is that we stick to the original number of letters. So five As in the middle means five Bs, which are always located at the same point on the A. If you want to vary the number of letters, this does work, but it significantly increases the number of errors in maintaining the symmetry.

We continue with the C. Here, it doesn’t matter if the letters are legible at the end and they of course don’t all have to be facing the same way. Go crazy!

Tip: this also works with numbers and names.

Now we turn to a drawn mandala:

We first draw a circle with the pair of compasses in the middle of the paper. From this central point, we simply change the radius and thus achieve rings of different widths.

In theory, you can begin filling these rings with color or various patterns now. But we want to make things more exciting.

For this reason, we now draw a line through the center to the outermost rings with the set square. We will now orient ourselves to this line and, with the help of the set square, draw in large “slices of cake.”

How did we do that in math?

There are now various points where our pencil lines intersect. We now use our pair of compasses once again. We select one of these intersections, e.g. one on the middle ring. We now draw a circle.

Basic symmetry is very important in mandalas. If this is the case, it doesn’t matter if a mistake slips in later with the details. It is therefore important that we copy this circle we have just drawn symmetrically throughout our work. So, in all eight cake slices or, if it is a larger circle, just in the quarters. There are no rules. The main thing is symmetry.

The more you have drawn in, the trickier it will be to always locate the right places.

We now have the basic structure and numerous individual fields that can be adorned. The simplest thing is always to begin in the center.

You can see here on the example image that I haven’t drawn very precisely, but it isn’t a problem. In the end, these irregularities won’t be noticeable. The important thing is to keep the overall symmetry in mind.

Allow yourself time. A beautiful mandala needs to grow. Experiment with free forms and also with hatches and patterns now and then. I often have to go back to the pair of compasses occasionally to fill gaps with additional supporting circles.

If you think your mandala is finished, erase the pencil sketches and consider a beautiful color scheme to color your artwork.

I like to do this with a brush and watercolor pens so that I can bring in subtle color transitions.

Would you prefer not to draw your own mandala, but rather just color one in? Then take a look at Dagmar’s free mandala template to color in. 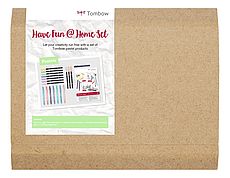 Just open it and get started – the creative set for your pastel artworks at an attractive price. Only available for a short time.
€49.90
Details

Mechanical pencil with eraser is available in attractive design and 10 different colors. Long metal refill ideal for drawing using a ruler or template.

Available in various colours
from€7.50
Details

With a thin and wide tip – extremely versatile. The permanent ink is suitable, for example, for outlines in combination with the vivid colours of ABT Dual Brush Pens.

Available in various colours
from€3.30
Details 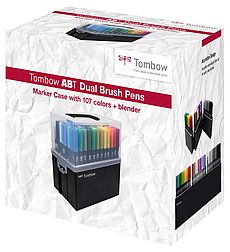 Available in various colours
from€50.40
Details

Available in various colours
from€25.20
Details

Available in various colours
from€4.20
Details

Available in various colours
from€24.00
Details

Available in various colours
from€2.00
Details 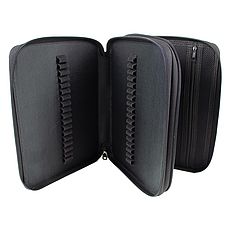 Store all of your favorite pens from Tombow in one bag. Creativity on the go!
€34.90
Details